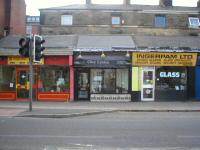 Chez Lahlou restaurant is located at 10 Commonside in Walkley.

A lovely throwback to an older type of restaurant that seems to be going out of style these days. In general the food is quality, although the menu options do vary a bit. The quantity of food you get is astonishing, I personally would recommend avoiding starters, note it is absolutely fine and accepted to take your food home from here.

I'd advise against eating here if you are a vegetarian or are somehow unfortunate enough to have one in your group.

Party of 11 of us went for my partner's granddaughter's 21st birthday on 1st September. l can safely say 11 people will not be returning. I have had better meals 2-for-10 pounds in a pub.

My scampi was the cheapest you can buy. The others had steak, which was tough. We did not complain so as not to upset the party mood, but the waitress knew with the amount left on plates.

Five-star by far. Steaks to die for. But do not order starters, as you will be too full. The owner is a fantastic lady. Would highly recommend to everyone.

Hilariously bad. Table booked for 8 people at 8:30PM (already later than we'd really wanted, but they couldn't fit us in earlier) and £40 deposit paid. The issues we had wouldn't have been much of a problem if just one of them had happened, it was the combination of everything that made the whole experience so ridiculous. It was like Fawlty Towers in the form of a restaurant.

The table wasn't ready when we arrived so we went to the pub across the road. Finally got table at 9:15PM. It was only set for 7 and I can't imagine where they'd have put the 8th person if they'd been there, but fortunately they'd ended up not coming. The table was still set with the grubby tablecloth with food spillages from the last group who'd sat there, which wasn't very nice.

We were left for ages before someone took our orders, and there were no vegetarian main courses on the menu despite us having checked this when we booked and being told there was at least one veggie option. The waitress said they could do some pasta as a veggie main course.

Lots of the things we ordered turned out not to be available - the waitress kept disappearing to the kitchen to check, then not coming back to us for ages, as she'd go to other tables. Drinks took ages to arrive and some had to be asked for several times before we got them. The wine that was ordered wasn't what was brought, and apparently they didn't have either still or sparkling mineral water.

At about 9:45PM, some plates of lobster were randomly brought to us, and we were told they were complimentary. Apparently they were good, but as I'm vegetarian I can't comment myself.

Once that had been eaten and the plates removed, we waited for the starter. And waited. And waited. At about 10:45PM, we told the waitress to cancel our main courses as it was so late - we still hadn't got our starters, and none of us felt like eating great big steaks at this time of night. She initially said that the chef had started cooking them so we couldn't cancel them, but we pointed out that it was now more than 2 hours after the time we'd booked for and that we still hadn't even got our starters, so it wasn't unreasonable for us not to want to pay £17 apiece for a meal we probably wouldn't be getting until 11:30pm.

Shortly after this, my starter arrived (melon in port). 5 minutes later a few other starters were brought, and after a bit more time another one arrived. We were still waiting for some garlic bread, which eventually arrived about 20 minutes after the first starter had come.

The melon in port was what it said, difficult to go far wrong with that. The moules mariniere was nothing like any moules mariniere anyone had ever seen - apparently it was OK but the taste of the mussels was drowned out by the tinned tomatoes, melted cheese and salmon on it. The garlic bread was just some slices of French bread with cheese melted onto it. The "avocado and prawns" was the worst of the lot - it was a pile of guacamole that had blatantly been bought ready-made in a tub and upended onto a plate (and it wasn't particularly nice) with a few prawns scattered on top.

We ate our starters, paid (having had to get the bill corrected, as they'd charged us for too many drinks) and went home for a takeaway, and will be avoiding this restaurant at all costs in future. I'm amazed they get any business at all.

I've been to this restaurant three times, but after my last experience, I suspect I will never return. It was so bad it was laughable.

First, there was a wait for the table, so we had to go to the pub over the road. Then, they seemed to not have anything that we wanted to order. Then, they didn't take a drinks order, so when hassled, they brought half of the drinks, the other half turning up after hassling them again. Then, the food was approximately a further 90 minutes late. Then, they made a mistake on the bill (overcharging).

We were supposed to eat at 8:30PM. We left at 11pm, having eaten just the starters (one of which arrived much later than the others because they'd sent our starter to another table and had to cook another). They did give us a free lobster course, but to be honest this one ray of sunshine was lost in the fog of incompetence that seemed to have engulfed the place.

In isolation any one of these things wouldn't ruin an evening, but I couldn't think of any other restaurant where everything that could have gone wrong has gone wrong.

You simply cannot beat the value for money that you get here. The food is fresh and fantastic. The decor is dated but doesn't deter from the great food.

Service at times was slow but the staff are friendly.

Would recommend you try this place, don't order a starter you simply won't finish the rest of your meal.

After the rave reviews I have heard about this restaurant I can't express how disappointed we were. I've been to better truck stops on the A1.

Don't order a starter, you wouldn't believe the portion size! The amount of food waste is incredibly distasteful in this day and age.

The food is ordinary at best. Friendly staff and great coffee.

We've been going to the Chez Lahlou for over 20 years. Food is fantastic, freshly prepared - don't order a starter as portions are generous. What you don't eat you can take home.

Very friendly and cosy. We avoid Friday and Saturday nights as it gets busy but other nights are very relaxed. We love it!

We agree toilet is a bit quirky!

Disappointing is the main word for my experience in Chez Lahlou last night! I had wanted to go for ages and was really looking forward to it. It was like eating in my Granny's front room. Lots of trashy little ornaments that were just mismatched. The decor was so 1970s... dated.

The food was brilliant, very flavoursome. However, we ordered a house wine and it was Italian. I'm vegetarian and there was virtually nothing on the menu. I asked the waitress if they could do me a vegetarian meal and she replied that they did some lovely ravioli... in a French restaurant? I ended up having peppers and aubergines stuffed with mushrooms and rice. Nice, but the portions were enormous. Way too much. It could easily had fed six. So much waste in this day and age is simply distasteful.

Asked for tea after. They don't do it! So had coffee and mine had strange bits in it. Asked for a new one and the waitress simply threw the old stuff away, wiped the cup and refilled it. Awful.

And then my favourite experience, the toilet. Nasty. Down a fusty old corridor that smelled of stale socks. The toilet was filthy. The skirting boards were falling off, paper was peeling off and it was just manly!

All in all really, really poor. I wanted it to be so good. Disappointed and won't be going back. £18 was not worth it at all. Go somewhere else!

This restaurant is anything but French. Chicken wings & crudites? Nice gesture, but not necessary.

Portions astronomical, but with a price to match. If one orders the mussels one does not require the loganberry, melon, tomatoes, and salad as well. Less is more! Reduce the amount of food, reduce the price. More goes in the bin than is eaten! Emphasis is on quantity rather than quality.

Not sure what is trying to be created here. It is a mish-mash of so many things.

Would I return? No, which is a shame, because I think it could have potential, but as it is, not my cup of tea. Too 'in your face', and no class. 3/10

Have been to this restaurant a couple of times and have always thoroughly enjoyed it.

The staff are welcoming and the menu is extensive.

The portions are very generous and very tasty. Be warned, I would not order a starter if I were you, as you get so much complimentary food, e.g. marinated chicken wings, which are delicious. They also have seasonal dishes such as pheasant.

This French restaurant is fab. It's only small but the food is out of this world. You don't need to order a starter because you get so many complimentary bits to try, from chicken wings in the most delicious of marinades to a mixture of French breads. The lobster is delicious too, and well worth a try. You also get dishes full of potatoes and vegetables served with your main course. The staff are very welcoming and friendly and they make your time there very pleasant. My husband and I can't wait to go again to try something else on the menu. Book early as this restaurant gets booked weeks in advance.