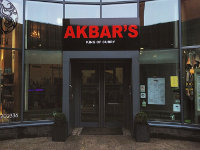 The starters were delicious, we ordered poppadoms and the pickle tray had 4 items but no onion mix (my favourite).

My companion ordered the balti with a rice and chips. I asked if I could have a mixed biryani, as the menu just listed biryani. The waiter said chicken and lamb, or chicken and prawns. I asked again for mixed, he repeated previous choices, so I said chicken and prawn. We also ordered a large (very impressive) garlic nan. The nan was plain, not garlic, and I received a balti not a biryani. We didn't complain, it was nice enough, and maybe he repeated balti and I just didn't hear him right.

We asked for the bill and were informed that the vanilla ice cream was not charged for. Pretty dark in there but the bill looked like £44.95 but definitely £44 something. I put £50 on the tray and would have left the change, as tip as the staff were very pleasant, but was not given the option, as they didn't bring me any change.

Eaten at Akbar's? Write a review!